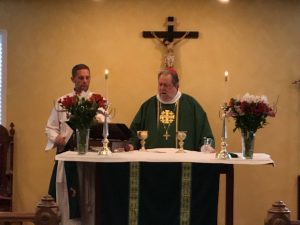 I was so blessed at our recent retreat! The Patriarch spoke words that brought hope and kindled the desire for a powerful future and the prayer both corporate and personal was filled with the Holy Spirit. Those present and those rising up are forming a tight bond. We of the newly reformed Mid Atlantic Diocese are setting solid foundations for growth and a bold vision for the future. This makes us, in a way, a microcosm of the greater ICCEC.

During the retreat, the Mid Atlantic Diocese commission on ordination recruited four candidates into the seminary process and are set to ordain two deacons in the next calendar year.

I believe that we are forming a real team approach to our newly reformed diocese. Those who are gathering are forming a tight bond. After the retreat the Primate’s council formed a church planting growth commission that we’ll meet and plan to help our parishes in missioning, re-missioning, and overall moving forward!

That Friday’s gospel message was very poignant on our calling, as Jesus reassures John the Baptist on how He, Jesus, is the chosen one as he brings sight to the blind, the lame walk, lepers are cleansed, the dead are being raised and the poor are hearing the good news preached to them.

This is closely tied to a recurring word our diocese has received regarding our purpose found in Isaiah 61. The church has been encouraged to take on that mission within verses 1-9 and to wrap ourselves in that word. Repeating it louder and proclaiming the year of the Lord’s favor.